Every person has a story, every life has a picture and every event has a purpose. The following contains a brief glimpse into our story and the events that changed our lives forever. Space alone prohibits me from sharing our whole story and the many details that are necessary in painting a complete picture of the events that occurred, our reactions that transpired and how it affected our relationship people…and with God. What I have attempted to do in the few paragraphs below is to provide you with a brief glimpse into the darkest days of our life and our resolve to conquer the monster that tried to destroy us. The entire story will have to wait for another time. But for now, here is brief glimpse. 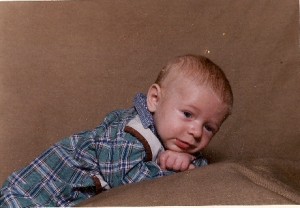 Ethan was our youngest grandson. He was full of life, overflowing with energy and always bubbling over with a big smile. He loved the outside, grabbing a handful of grass and watching leaves blow in the wind. Ethan was the ‘baby’ grandchild of the bunch and everyone spoiled him accordingly. His cousins were one, three and four so we simply called him ‘Baby Ethan’. He was two days away from his six month birthday…and then he got sick. It was on Wednesday morning, August 26, 1998. After a panicked rush to our small, local community hospital, Ethan was transported by helicopter to the Children’s Intensive Care Unit at St. Francis Hospital in Tulsa, Oklahoma. We would spend the next two days living in the Pediatric ICU waiting room while the doctors tried desperately to determine the cause… and cure for Ethan’s condition. Something had caused his kidneys to stop functioning and as a result his blood became ‘contaminated’.

According to the doctors Ethan fought as hard as any child they had ever seen but in the end the battle was lost. It was early afternoon on Friday August 28, 1998. We were all called into his room. My daughter Tina was sitting in a chair next to the bed with her husband Raymond at her side. Deborah, my wife, was in a chair next to her. The doctor came in and told us that they had done all that they could. He was so kind and understanding. He had the nurses lift little Ethan from his hospital bed and gently place him in his mother’s arms. Then they removed the tubes and monitors that had kept him alive for two days. It was 1:38pm when the angels came and scooped up ‘Baby Ethan’ from my daughter’s lap and carried him into the waiting arms of Jesus. Up to that moment we all, especially myself, just knew that God would heal our Ethan. When He didn’t we were all shocked and devastated. It left us with doubts about whether God really cared or not. It was definitely the darkest moment of our lives. Nothing could hurt any more than this. At least that’s what we thought. If we had only known what was to come.

We began to make preparations for the funeral. Since it was also the weekend we had church responsibilities to attend to. I was serving as the Pastor of a small rural church and I would have to find a way to comfort and encourage not only my family but our close knit church family as well. The funeral was scheduled for Monday afternoon at 2:00. Our small church auditorium was packed. There were more people from the community in attendance than our own church members. We were quite surprised, but pleased. My oldest son David was our youth pastor and he helped me greatly with all of the duties. He was especially helpful in providing comfort to our members, to his sister and to his mother. He carried most of the load over those few days and I couldn’t have made it without him. Ethan was to be buried in the Pioneer Cemetery just outside of town so David wrote a poem that he entitled “The Littlest Pioneer”. It was about a little boy that leaves this life prematurely and leads others down the path to Heaven. He read it at the funeral. It was tough but we made it through. After the services at the church many of the people followed us to the cemetery for a brief graveside service. As we were preparing to leave the graveside David took a few moments to kneel down at Ethan’s casket along with his three small children. I was standing close by so I was able to listen in as he explained to them that their cousin, Baby Ethan, wouldn’t be coming back and that he had gone to live with Jesus. How do you explain death, Heaven and forever to a small child? As long as I have been in the ministry I’m still not sure that I know the best way. I had no idea that later that evening I would have to try.

Everyone left the cemetery and we made our way back to the church to clean things up and try to go on with life. My wife and I along with our youngest son lived next to the church so our whole family came over to our house. After the cleanup I went to my office and everyone else went over to our house, everyone that is except David. He had started a new job less than two weeks earlier and he wanted to check in at his office before his fellow employees went home. I was in my office around 6:15 when he called and asked me to pass the message on to Mandy, his wife, that he would be home in a few minutes. Some time then passed by and I left my office and went outside to toss a ball with David’s two boys, ages three and four. I didn’t realize the time but it must have been around 7:30. A man and women drove into our church parking lot. I would find out later that it was a local pastor and his wife whom I had never met. I went over to greet him as he got out and he introduced himself. He then asked me if I was related to a David Standfield. When I answered yes but how did he know he handed me one of our church brochures. He then explained what had happened. He and his wife had been traveling on the turnpike when they came upon a terrible car accident that had just occurred. They were evidently the first ones on the scene. He had found the brochure among the debris. I immediately asked how bad David had been hurt. He simply said “I’m afraid that he may be dead”. I was standing along the side of a car and I had to turn and grab hold of the fender. My legs almost gave way on me and I suddenly had this horrible sick feeling engulf my whole body. After a couple of moments I turned back to him and desperately asked. “Are you sure? We just buried my grandson this afternoon. Are you sure?” He said that he couldn’t be positive but that the paramedics had taken him away in the ambulance.

The next 30 – 45 minutes seemed like hours and hours. Time and space won’t allow me to explain all of the details at this point but we all jumped into my van and headed out to find my son. I had only told everyone else that David had been in a wreck. At this point I just couldn’t accept what I feared in my heart to be true. I left my son-in-law Raymond, Ethan’s father, with David’s children. Finally, after a frantic search and several desperate cell phone calls we met up with a State Trooper at a designated spot along the highway. He was there waiting for us when we arrived. We all got out of the van and approached him together. It was almost dark by now and as we made our way toward him in the twilight I can remember him stating something to the effect of “I didn’t realize that there would be this many of you”. He then looked straight at my wife and asked “Are you David’s mother?” She nodded and answered “Yes”. His next words plunged a dagger in our hearts. “Your son is dead”.

I can only explain what transpired next as complete emotional and mental chaos. Tina began to scream “It’s all my fault; it’s all my fault because I let my baby die”. Michael doubled up his fists and covered his face all the while screaming “He can’t be dead! He can’t be dead! He can’t be dead!” Mandy had been standing next to me as we approached the trooper and she just began to scream and started beating me with her fists over and over again. I then found myself running around trying to grab everyone and keep them from collapsing. It reached a point that I had to ask the trooper to call an ambulance out of my fear that someone would literally have a complete breakdown. Finally my wife and I found each other in the dark. Crying uncontrollably, we fell into each other’s arms. I remember saying to her through all of the tears, “I don’t have an answer for this”. The emotional, mental and even physical pain was so intense. It was my job to do something but I couldn’t. I had to make it go away. How could I have let this happen to the ones that I loved more than life itself? I have never felt so helpless in my life.